On this day’s hike, we chose to combine two stages as we had to be on time to catch the Sarfaq Ittuk ferry in Sisimiut and also expected the terrain to be relatively easy according to Paddy Dillon’s guidebook. But nothing is really easy on the ACT and it turned out that we both had to go rock climbing and wading through countless boggy parts before the day was completed.

After a morning dip in the icy lake, we went on in shorts and under a clear blue sky. The weather was finally with us – all day! After about 5 km we passed a series of small lakes on the left hand side and lush south-facing herb-slopes – also called “urtelier” – on the right hand. Here we encountered the most species-rich flora so far and if I’d had the time, I would probably be able to count well over 50 different plant species (see also plants).

And in the air, the only two butterfly species found in Western Greenland, the orange and black-stained Arctic fritillary and the pale-yellow Northern cloudy yellow, were circling around. What a scenery! 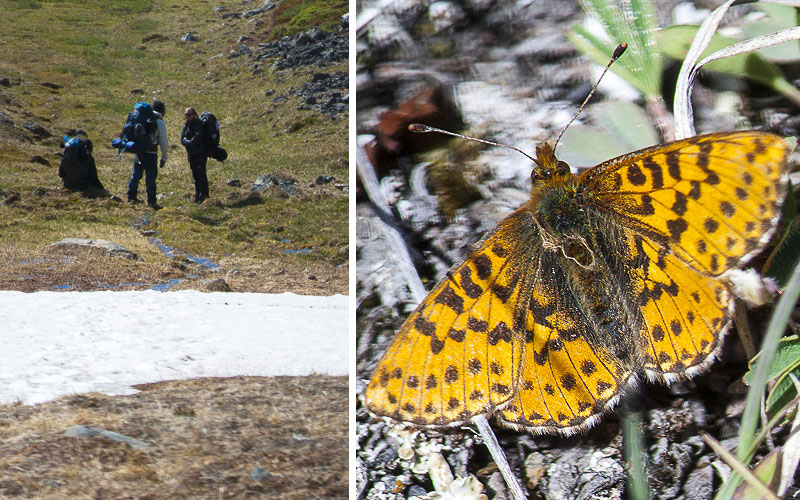 A rare sight – other people! And a butterfly – the Arctic fritillary.

Later we met several hikers coming towards us, which was a new experience as until then we had rarely met people on the trek. Delightful hiking continued until we reached the Nerumaq hut at around 5 pm. We prepared a quick meal and rested for a short while. Ready to move on, we forded yet another river and the terrain went on alternating between boggy ground and dense shrubs. As a result our pace dropped equally. At one point we went through the tallest willow scrubs that I have ever seen in Greenland – over 3 metres high, almost like a real forest.

We followed the trail for another 5-6 km and reached a very lively river, cutting through a bouldery gorge. We had completely lost the trail and couldn’t find a safe place to ford the river, so we decided to follow it downstream. However, this was a pretty risky move and in a quite amateurish way we climbed up and down the steep cliff sides, while almost deafened by the loudness from the river. Finally we found a way to escape the gorge by climbing upwards until we were “safe” on the ridge of the gorge. These are the situations where you, tired and in unknown terrain, have to be extra careful not to do anything heedless (such as stumble and fall into a rushing river).

More swampy and wet valley terrain followed along the same river until we reached a larger lake. In the low midnight sun we then walked the last few kilometres alternately on sand and through bogs and shrubs. At one point I felt totally exhausted close to collapsing, while Kia just went on at full speed. We finally reached the hut for the night, located at the bottom of the large Kangerluarsuk Tulleq Fjord. Unfortunately, we woke up two people in the hut, who turned out to be a father and son working for the municipality to maintain the trail and the huts.

Waking up to nice and sunny weather, we enjoyed our last supplies of muesli and instant coffee before commencing on the final day of our ACT experience. And what a beautiful day! The climb up the ascent to the Qerrortusup Majoriaa valley, about 400 m above sea level, felt just great with amazing views of the mountains and the Kangerluarsuk Tulleq Fjord.

After 7-8 kilometres of comfortable walking, we got a splendid view towards a ‘fairy-tale’-looking valley flanked by steep mountain slopes with the peak of the Kællingehætten as the most significant. At the bottom of the valley a river was bending its curves and the whole panorama was like a scene from the Lord of the Rings. But it was real and that day is now safely kept in my memory as one of the most mesmerizing sceneries. 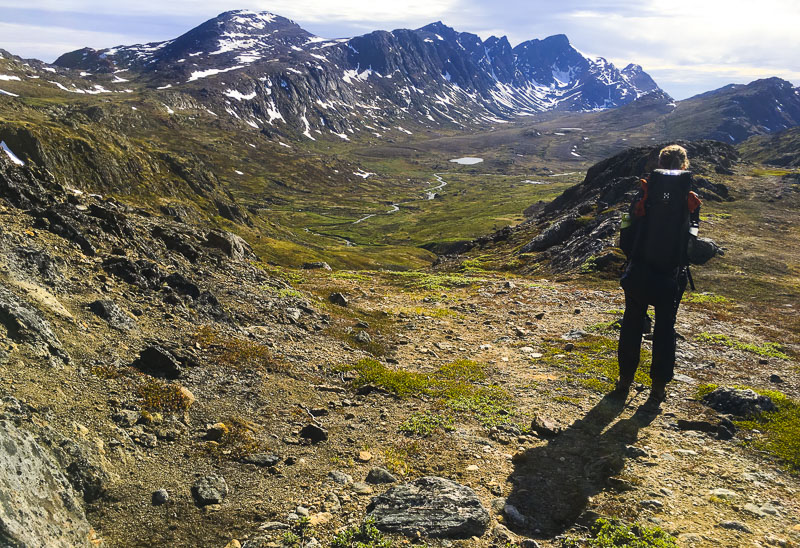 Mythical land, as taken out of the Lord of the Rings.

A pleasant descent to the valley followed and it was simply nice to still be alone in the great outdoors. But at the same time we also began to look forward to reaching civilization once again and getting a nice hot shower. We slowly approached Sisimiut and late in the evening we reached the town’s youth hostel, our end destination. We were both extremely tired and very happy. We made it! ACT done! 🙂

The Arctic Circle Trail is located on the western coast of Greenland connecting the towns of Kangerlussuaq and Sisimiut. There are no roads between the towns. The ACT is 165 km long and extends in an east-west direction approx. 70-80 km north of the Arctic Circle.

Map of the ACT. Click on the map for a larger version! Source: www.conrad-stein-verlag.de/buecher-shop/groenland-arctic-circle-trail/

As the area has midnight sun in the summer – from the beginning of June to mid July – it is possible to walk at any time during the day. In contrast, it is totally dark almost 24 hours a day in the winter. Complete darkness, however, will not occur as the sun will not descend below the horizon as further north in Greenland.

Like most of Greenland, the area is mountainous and without trees. Along the ACT you will walk across mountain ranges of up to 5-600 m above sea level, while the highest peaks in sight reach 1,500 metres. The biggest mountains are covered in snow and ice all year round.

Kangerlussuaq is located at the bottom of the fjord with the same name approx. 30 km west of the Ice Cap and approx. 160 km east of the coastline, where Sisimiut is located. About 500 people inhabit Kangerlussuaq, most famed for hosting Greenland’s only international airport. There is a small supermarket near the airport, where you can buy the most necessary goods, as well as a variety of souvenir and trekking shops. 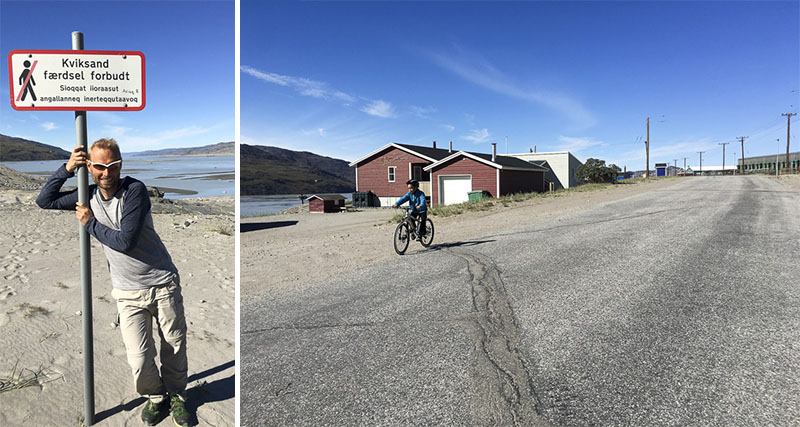 With its 5,500 inhabitants Sisimiut is Greenland’s second largest town and a hotspot of education, commerce, fisheries, and a growing tourism industry. Sisimiut has a broad range of services, including hotels, a youth hostel, museums, cultural centres, and excellent opportunities for hiking, boat trips, whale watching, and much more.

The dry continental climate at Kangerlussuaq and towards the edge of the Ice Cap makes the vegetation sparse, characterized by dwarf-shrub heath, grass-steppe and in some places even sandy and desert-like.

Further towards the coast and on most of the ACT route, the climate is more humid and the vegetation hence more varied and lush, defined by a high diversity of shrubs, low-Arctic flowers, and wet mosses.

Characterized by its location just north of the Arctic Circle, the biotope in the area is both harsh and generous. The long winter with snow, ice, and extreme cold makes it difficult for mammals and birds to feed, while the short bright summer offers an intense growing season for plants, which in turn provide food for many insects and animals.

The natural vegetation along the ACT course consists mainly of mountain heath with dwarf shrubs, heather, and low-Arctic herbs and flowers. Typical plants are dwarf birch, black crowberry, bog bilberry, bell heather, and blue heath. Where conditions are most fertile, willow scrub grows up to a few metres high and is the closest it gets to “forest”. 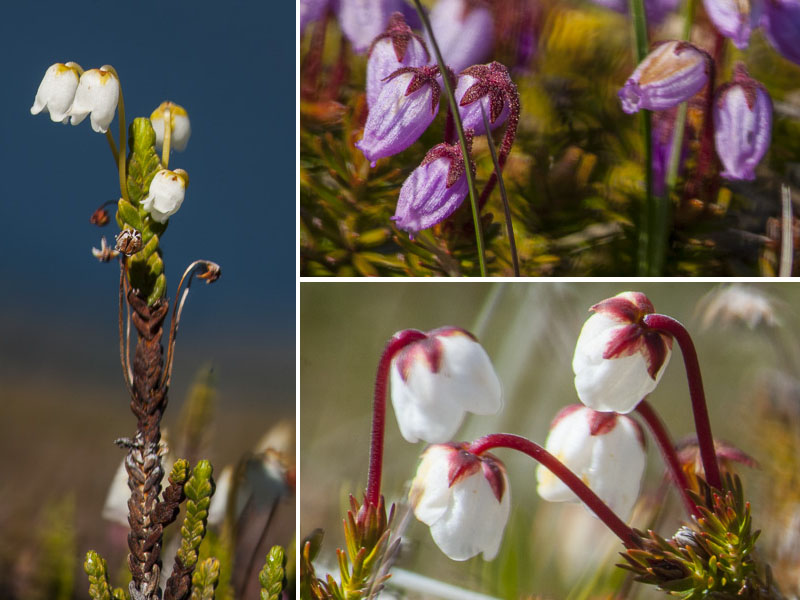 The Greenlandic flora comprises 510 native species, and at least one third of them are found in the area along the ACT. For example, you may experience the purple-flowered broad-leafed willow-herb, Greenland’s national flower, or the highly aromatic white-flowered marsh labrador-tea.

Particularly astonishing are the herb-slopes or “urtelier”, which are south-facing lush mountainsides that in the short summer are bathed in the low Arctic sun for most of the day. Here, one can often find more than 50 plant species, including a few orchid species such as Northern green orchid and heartleaf twayblade. 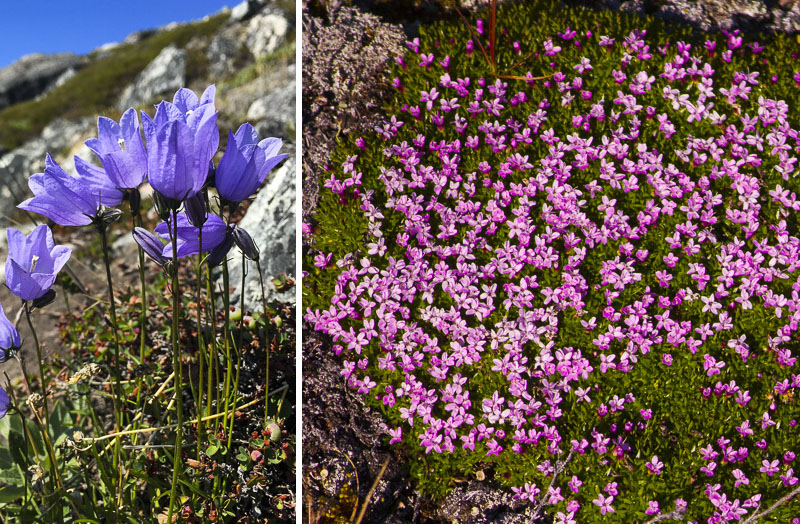 Along the ACT course are four types of edible berries that can be picked from August: Black crowberry, bog bilberry, lingonberry, and common bearberry. Black crowberry – or just crowberry – is especially numerous and a healthy and tasty though slightly bitter supplement to the diet. Bog bilberry – also called Arctic blueberry – looks a bit like common blueberry and is almost as sweet but has white pulp. Lingonberry and common bearberry can be difficult to distinguish from each other, because of their similar red berries, but the latter has a more ‘floury’ and less attractive taste. 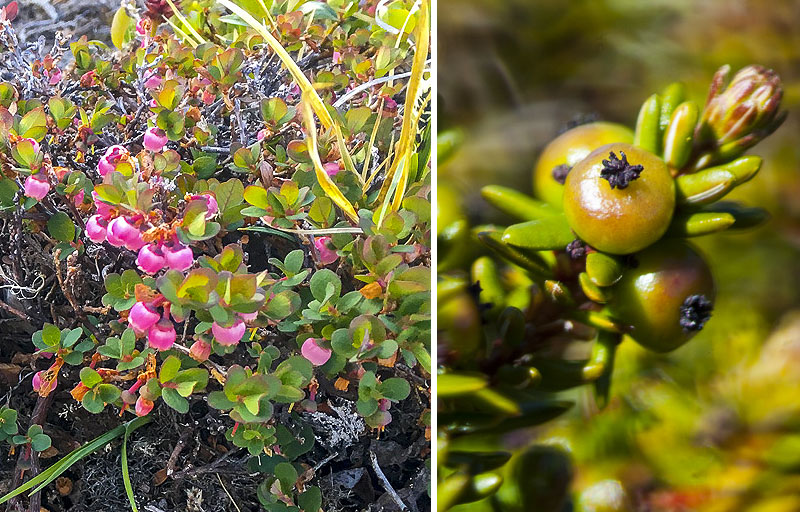 On cliffs and rocks where plants are rarely taking root, a rich abundance of mosses and lichens are prevailing. Mosses dominate where it is sufficient moist, while lichens can adapt to even long periods of dryness. There are about 1,100 moss species in Greenland and the green, yellow, brown, and sometimes almost illuminous carpets of mosses is a dominant landscape element anywhere along the ACT.

The lichens are also eye-catching in orange, yellow, green, and greyish colours. It is actually a double-organism, consisting of a fungus in symbiosis with a green algae. Of the 950 lichen species registered in Greenland, about two thirds live on rocks and cliffs and one third in soil and on plants.

Greenland is home to at least 700 mushroom species. On the ACT course, you can often see birch bolete and other species of boletus, all of which are edible and a great supplement to the diet. 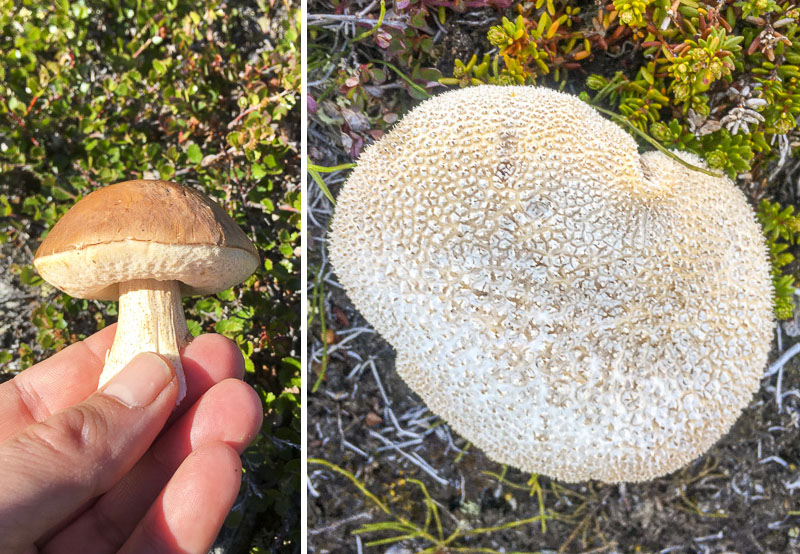 As in most of Greenland, the cold winter gives harsh conditions for wildlife and land mammals are low in number. However, reindeer, Arctic fox, and Arctic hare are common along the ACT and herds of musk ox can be seen on the steppes around Kangerlussuaq. Arctic wolf and polar bear do not occur in this part of Greenland.

The reindeer is often found in herds, which may vary in size and distribution from year to year. It survives the winter by – as the only mammal – eating lichens, especially reindeer lichen, which it digs out of the snow with its hooves. 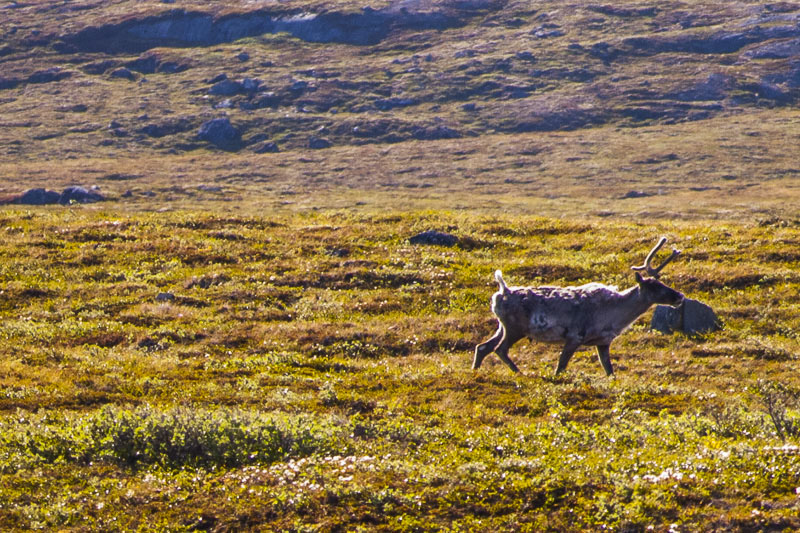 The large woolly musk ox is originally from North-East Greenland but has been introduced by man in several places in West Greenland, particularly on the plains near Kangerlussuaq, where today it numbers several thousand individuals and is – as the reindeer – a favourite game meat.

Along the trail, small birds like snow bunting, common redpoll, and Lapland bunting are commonly seen. The raven is visible all year round – often circling over the mountains looking for food like carrion, chicks, eggs, or even human waste. The distinctive rock ptarmigan can often be observed and for the persistent there are good chances of spotting birds of prey like white-tailed eagle, peregrine falcon, and gyrfalcon. 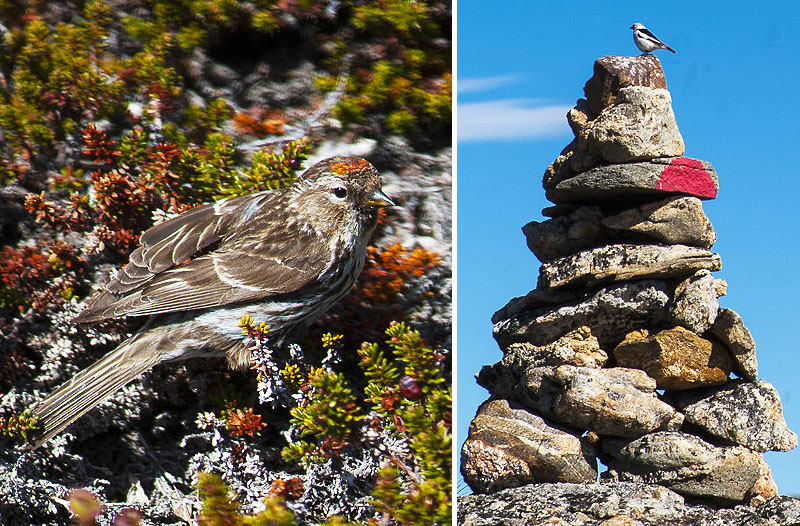 With flies and mosquitoes as notable exceptions, insect life is generally modest in diversity. For butterflies, only two species are found: Arctic fritillary with orange wings and a characteristic pattern of black spots and northern clouded yellow with beautiful yellowish wings. They both fly in June to August and are found in arid flowery areas. In total, several hundred insect species are found in the area, including moths, beetles, and spiders. 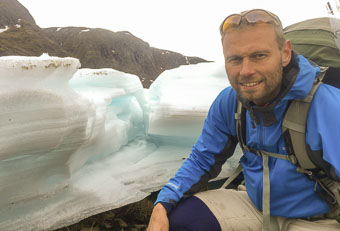 In this article you can read Part II of my report on the Arctic Circle Trail in Greenland. In addition, I have made special sections about the area’s geography, climate, plants and wildlife.

A comprehensive guide for the Arctic Circle Trail can be downloaded as a printer-friendly PDF here.

This article was originally published on the site, Greenlandic Seasons.