I have just arrived in Ittoqqortoormiit (June 25th, 2020) and I decide to embark on my first hike. Following good advice from the tourist office, Nanu Travel, I think it will be manageable to hike to the abandoned settlement of Uunarteq and back again. It looks easy enough on the map, anyway!

Ittoqqortoormiit is by far the northernmost town in East Greenland. To the north stretches the utterly desolate Arctic wilderness, and to the south, it is 800 km to the next town, Tasiilaq. There are about 350 people living in Ittoqqortoormiit. The primary occupation is hunting. There is a Pilersuisoq grocery store, a guesthouse, a tourist office, church, school, health centre etc. in the town, but otherwise it is one of the most secluded destinations in Greenland. 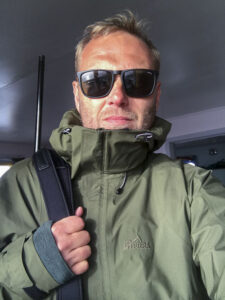 I rent a rifle from Nanu Travel. This is polar bear country, so you must always carry a weapon when you are outside town. As recently as last week, the local police officer had to scare a polar bear away with warning shots.

A little after 1 pm I set off on the hike, full of optimism and adventure. The sun is shining, it is about 5 °C, and since it is light 24 hours a day at the moment, there is no time pressure to get home. I pass the radar station, a dog area, the dump and up through a valley. It’s hard to find the route markings, but finally I discover the first, which consists of a white triangle painted on a rock.

After a few kilometres I test the rifle. I hit what I was aiming for – a snowdrift under a large rock. This gives a loud peal and I do not have earplugs with me, so I conclude that a single test shot was enough.

It is difficult hiking terrain with many rocks, rock passages, ups and downs, and a number of places where hands must be used for easier climbing. I see the first eider ducks – a beautiful sight.

After another few kilometres I come to a river that must be crossed. There is too much water pressure for me to get over where the white triangles are. So I walk a few hundred metres up to the source of the river by a lake. There is still partial ice cover on the lake. Off with the boots, and I cross the river with careful steps through ice cold water which is up to the knees.

The highest point of the trip

I lose sight of the white triangles, so I walk along the coast, along the small bay Amdrup Harbour, following a rather undetailed map I have, as well as my sense of orientation. Difficult terrain but beautiful views over the enormous Scoresby Sound – the world’s largest fjord system – with the majestic basalt mountains far away, on the other side to the south.

I reach the bottom of Amdrup Harbour, and follow a decent ascent from here, and there are no white triangles to help. I end up roughly on top of the mountain Inugsukajik (270 metres above sea level) and I rest at a cairn. I enjoy the view but am already pretty tired due to the terrain. I have walked approximately 8 km.

Afterwards, I follow a nice stretch with nice views and a slight descent, followed by a longer descent, which I take in small runs via snowdrifts. It’s quick and easy. I reach the bottom of the small bay called Fox Harbour. Here I see some sea urchins diving for fish.

The area here is very flat and more easily accessible than the previous terrain. I come to a wetland where there are many birds, including geese, and then I almost stumble over a snow hare! It is not afraid of humans and I can almost hand-feed it.

A skua comes flying and tries to scare the hare away. Why, I can’t figure out. Maybe it has a nest somewhere. I continue along the flat but rocky stretch along the coast and head south 3-4 km until I reach Uunarteq.

Ghost town in the fog

The wind picks up and a haze begins to roll in from the east. When I finally reach Uunarteq, I can hardly see anything anymore, and this isn’t so good because it makes it harder to orientate myself in relation to polar bears. I take shelter in one of the houses in the abandoned settlement. I get warm and eat some food I brought with me. The settlement is a bit of a ghost town, the way that the 20-30 abandoned houses stand there in the fog. Many of the houses are maintained by the owners and used as summer houses or hunting lodges.

There is a hot spring with 62°C, sulphur-smelling water, about 1 km from the village. Uunarteq actually means ‘hot spring’ in East Greenlandic.

But because of the fog and the wind, I give up trying to find the spring, and decide to go back again, and now I also know the route better.

I head back out, and it’s really annoying with the icy cold wind. I come past Fox Harbor again and more into the shelter. I take the same snowdrifts up the mountain, but cross further to the left to save altitude, and it turns out to be a good decision, even though it’s still hard, with some climbing involved.

I reach the bottom of Amdrup Harbour, and this time I see the white triangles, which I follow (they are further away from the coast than on the way out). I make it to the river again, which needs to be crossed, and find a place 20-30 metres down from the source where I can cross with boots on, but I still get one boot completely full of water.

At some point, a female eider duck flies up, and I see the nest, built of the finest down, that can keep the four eggs warm.

Finally Ittoqqortoormiit comes into view, the sun is low, and I head down via a long snowdrift. Past the dogs, the radar station, down some stairs, over the bridge, up some stairs, and then I’m home again in the guesthouse. It is 3 am, and a fantastically beautiful but also physically demanding hike has come to an end.

The terrain in some places is rugged and physically demanding, when rocks and cliffs need to be climbed, sometimes with hands. The route is only partially marked, and you should not take the trip alone unless you have good experience with mountain hiking. The distance can be halved by sailing one way (ask Nanu Travel).

This article has also been published at Visit Greenland.

The white line indicates the approximate hiking route to Uunarteq (Uunartoq). The map can be obtained at Nanu Travel’s  office in town. Click map to enlarge. 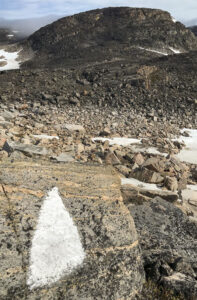 The hiking trail to Uunarteq is only partly marked with white triangles.

How to get to Ittoqqortoormiit

Getting to Ittoqqortoormiit is not easy or cheap. From Akureyri in Iceland, there are 1-2 weekly flights to Nerlerit Inaat (norlandair.is), from where you fly onwards by helicopter the last 40 km to the heliport in Ittoqqortoormiit (airgreenland.com). The airport in Nerlerit Inaat consists of a 1000 m long gravel track and was built in 1985 by an American company that searched in vain for oil in the area.

In Ittoqqortoormiit there is a Pilersuisoq store with everything you need, and it is open every day, even on Sundays. Nanu Travel, which has an office directly opposite the church, arranges boat trips and rents out rifles, tents and various hiking equipment. It is also through Nanu Travel that you can book a room in the orange Guest House.