A hike in the northeastern Greenlandic wilderness in Jameson Land offers incredible mountain landscapes and intimate experiences with the large musk oxen that dig into the local vegetation. Jameson Land is pristine Arctic wilderness, and as a hiker you must take precautions.

After my stay in Ittoqqortoormiit, I had planned a 3-day hike alone in Jameson Land. This is a huge area the size of Funen (Denmark’s third-largest island) and characterised by a soft topography with low sandstone mountains and long stretches of valleys without glaciers. The area is also known for its large population of musk oxen.

I have planned to hike from the airport in Nerlerit Inaat and as far up the Goose River (“Gåseelven”) as I can, and until time demands that I turn back and return along the same route. I have a flight to Iceland that I probably should catch.

On July 6th, 2020, I take a helicopter from Ittoqqortoormiit to the airport at Nerlerit Inaat. I end up in the front seat of the small 5-seater helicopter, so there is an excellent view of the landscape. But this is also a challenge for my fear of flying, sitting and dangling in a small metal thing lifted high above the ground. However, the view won over the fear of flying.

Safely landed in Nerlerit Inaat, I immediately set off on my hike. I have brought a tent, sleeping bag and all my gear, as well as a rifle I have rented from Nanu Travel in Ittoqqortoormiit. A rifle is necessary, in the rare case that a musk ox should approach too closely, or a polar bear should roam by. 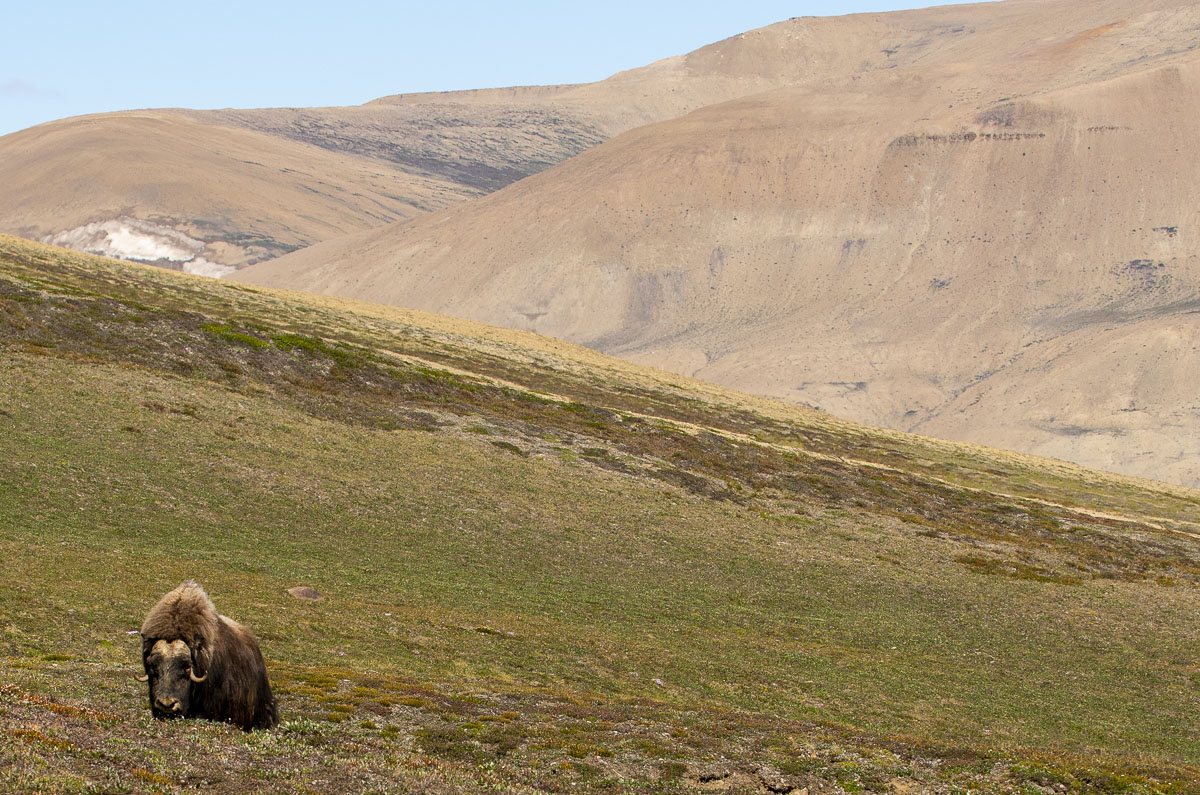 Already from the airport I spot my first musk ox, walking and grazing a couple of kilometres away. I head towards it and get some good photos taken. It’s a lone male who is following me closely with his eyes, so I keep a good distance.

I continue for a few kilometres in a northerly direction, until I reach the bottom of the valley through which the Goose River runs. A propeller plane from Iceland is about to land before I turn around the “corner” of a mountain ridge. Now I am completely out of reach of civilisation – my mobile phone no longer works, and I will not see people again until I return to Nerlerit Inaat.

As I mentioned, I intend to follow the Goose River a fair distance. The valley is quite deep in an east-west direction, with 4-500 metre high mountains on both sides. After about 10 kilometres of hiking in relatively easy terrain, except for a bit of stubborn brush and some occasional swampy ground, I reach a flat area close to the river (and hence drinking water) which looks ideal for pitching my tent. It has also got late in the evening, and although there is midnight sun, I am ready for a good night’s sleep.

I enjoy the low evening sun and the silence, which is only interrupted by the rippling sound of the river. A polar fox is lurking nearby and I see that it has a gosling in its mouth. Fresh catch! Both the Barnacle Goose and the Pink-footed Goose breed in large numbers in this area, which is of international importance, especially for these two species. 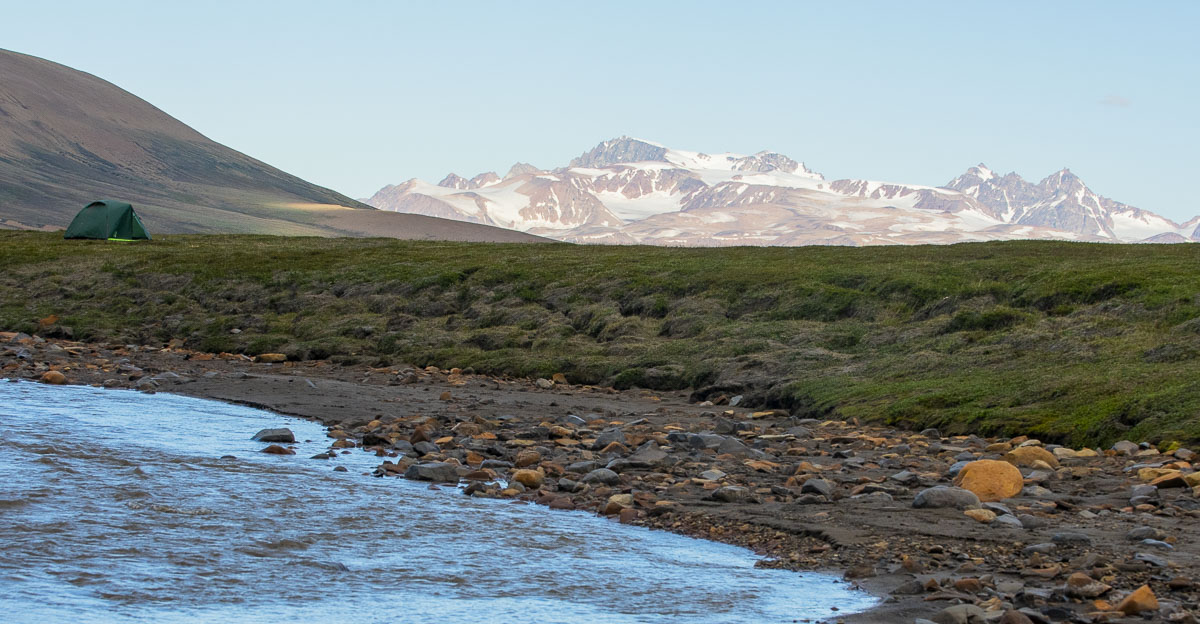 My “tent camp” close to the Goose River. In the background are the high, continually snow-capped mountains of Liverpool Land on the other side of Hurry Fjord. Photo by Bo Normander

I get up early and get ready for a long day of hiking – as far west as I can manage. I leave the tent as it is and take only the most important things with me in my backpack. It is cool and overcast, but the weather clears up throughout the day with some nice sun.

Now I have really arrived in musk ox land, and have good opportunities to watch these beautiful animals graze on the green mountainsides or rest by the river. Most of them are lone males. One of them looks at me angrily and snorts, so I keep a good distance from him. At some point later in the day, I see two musk oxen grazing close to the river, and when they see me, they run away from me at a full gallop and up quite a steep mountainside – maybe 200 metres of elevation in a very short time. It is incredible that such large animals can run so fast and be so agile. Their top speed is about 40 km per hour! 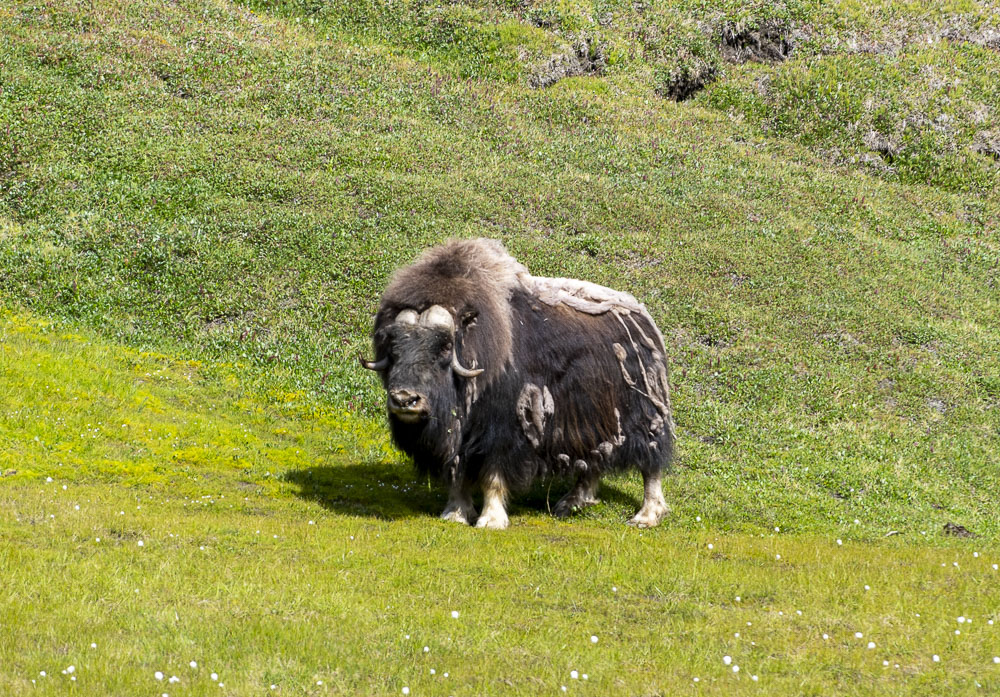 Musk ox bull. Males weigh up to 400 kg and are recognisable by, among other things, its hard forehead, from which horns emanate. The mating season is in August to October, when the strongest bulls gather a herd of females. When in heat, the bulls fight fierce battles by banging their foreheads against each other at 40 km/h with a deafening bang. The cow gives birth to a single calf in late winter (March-May), which follows the mother and the herd for 1½ years. Source: Nature Guide Greenland. Photo by Bo Normander

It is not only musk ox, but also many birds, that benefit from the rich vegetation in the area. I see a lot of wading birds, like Sanderlings, Dunlins and Common Ringed Plovers. In a wildly entertaining moment, I see a Common Ringed Plover do the “broken wing trick”, in which it runs around looking flustered with what is supposed to look like a broken wing, in order to divert enemies – in this case me – from its nest.

I also see Skua – both Long-tailed Skua and Arctic Skua. This is just before the trip turns into any ornithologist’s biggest dream, as I soon get the opportunity to closely study a Ptarmigan family of a mother and 5-6 chicks, which are moving around in a thicket by a small river bank.

The Arctic flora is also richly represented, as it alternates between scrub and dwarf shrubs, grassland, bog and decidedly flowery meadows, especially on the south-facing mountain sides. I will not bore you with the many Arctic plant species I found along the way, but will just name a few examples, such as the beautiful yellow Alpine Arnica, the Small Gentian, the Common Harebell, the Alpine Cinquefoil, the Alpine Bittercress, the Common Butterwort, the Mountain Campion, etc. 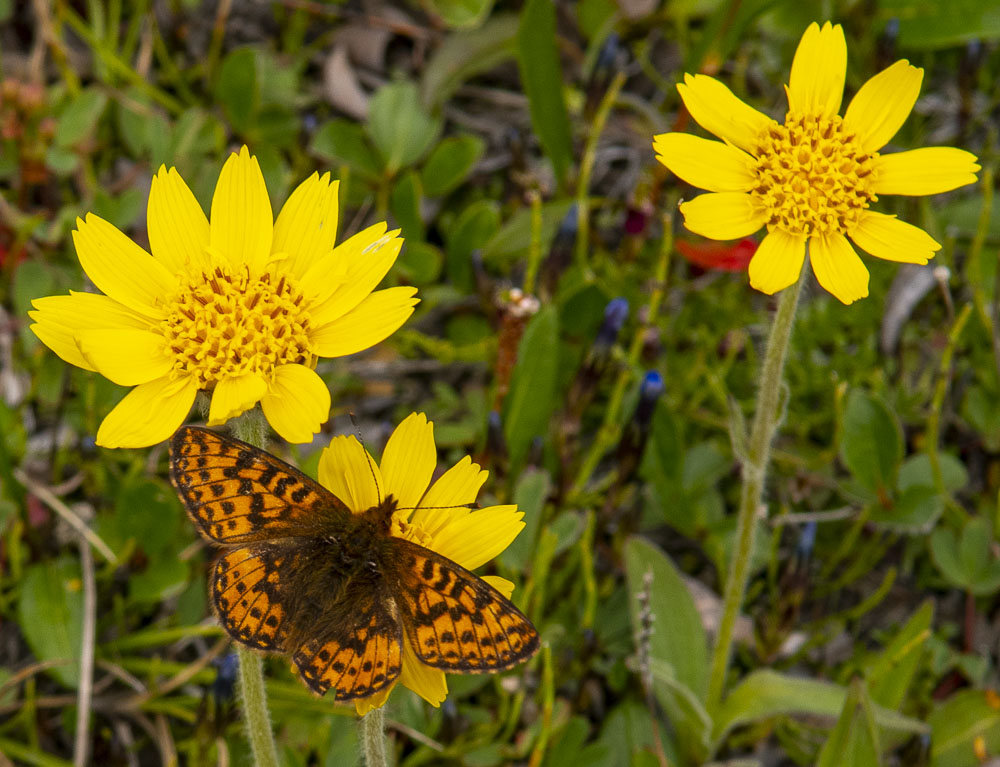 Eventually I have walked 12-13 km and nearly reached the source of the Goose River – it has become somewhat narrow in any case, and I can now easily cross it with dry shoes by hopping from rock to rock. I decide to go to the top of the nearest mountain, from where I imagine I can get a good view of the “heath” to the west.

I reach the summit of the mountain, which, according to my watch, is 450 metres high. There is indeed a beautiful view, and the “mountain” itself consists of the wildest sandstone formations, which are really beautiful. Sandstone is a rock consisting of deposited grains of sand that, millions of years ago, were cemented together into solid rock.

In reality, I have only explored a fraction of this huge Jameson Land, but I must return to the tent. So, after a while, I turn home towards the tent, which I reach just before midnight. Here awaits a nice cold Coca-Cola and food on the Trangia (gas cooking set).

Final morning on this fantastic little hike in Jameson Land. As I stick my head out of the tent, I see a musk ox standing and gnawing just a few hundred metres away from me. Although it is a big bull, it looks quite peaceful, and I can calmly prepare my breakfast, which consists of my last bit of muesli and instant coffee.

I get the tent packed up and head back towards the Nerlerit Inaat airport. I know the way. It’s beautiful, and even though my legs are a bit tired from yesterday and I have a couple of annoying blisters, it’s simply awesome to hike in this special Arctic nature. I say hi to the same musk oxen that I met on the way out (I think!), and then I reach the Nerlerit Inaat airport.

The terrain is reasonably flat and accessible. It is, however, hilly in places, and there is scrub along the way that can be a bit strenuous to walk through. The smaller rivers can easily be crossed. There are no footpaths or markings. You should not do this trip alone unless you have a lot of experience with hiking in the wilderness. It is recommended that you walk in groups of 2-6 people and preferably with an experienced guide.

This article has been translated from Danish to English by Visit Greenland. It first appeared here.

When hiking in desolate terrain such as Jameson Land, you should bring, as a minimum:

How to get to Jameson Land

From Akureyri in Iceland there are 1 or 2 flights a week with Norlandair to the airport in Nerlerit Inaat, which is the starting point for hiking in Jameson Land. From here, you can also fly onwards with Air Greenland by helicopter 40 km to Ittoqqortoormiit.

The airport in Nerlerit Inaat consists of a 1000 m long gravel runway, and was built in 1985 by an American company that was searching (in vain) for oil in the area. There is no shop, but it’s possible to stay overnight and eat at the airport.

In Ittoqqortoormiit (population: 350) there is a Pilersuisoq store with everything you need. Nanu Travel, which has an office directly opposite the church, arranges boat trips and rents out rifles, tents and various hiking equipment. 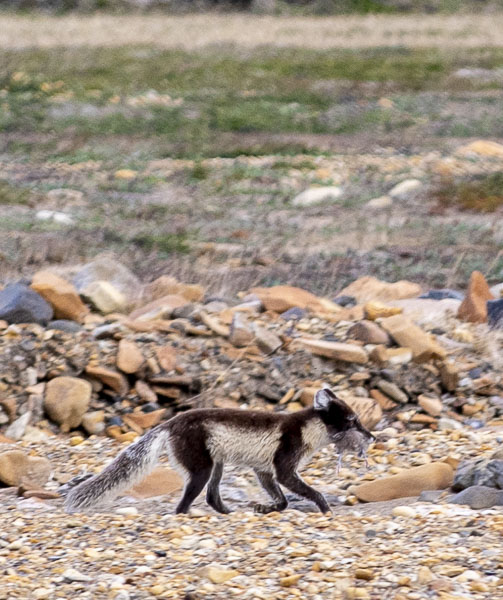 Polar Fox with a gosling in its mouth. Photo by Bo Normander 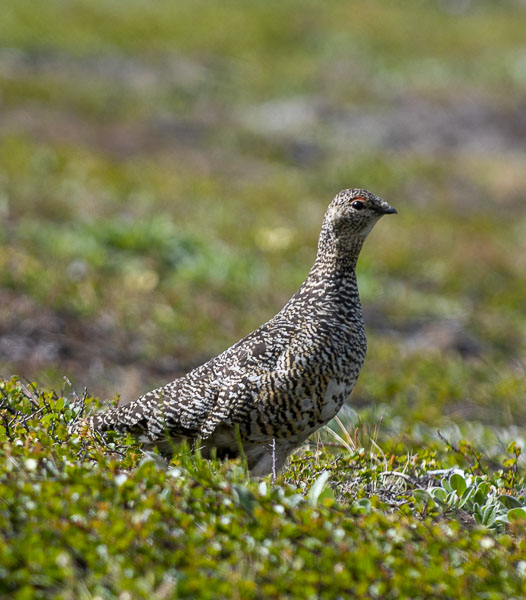 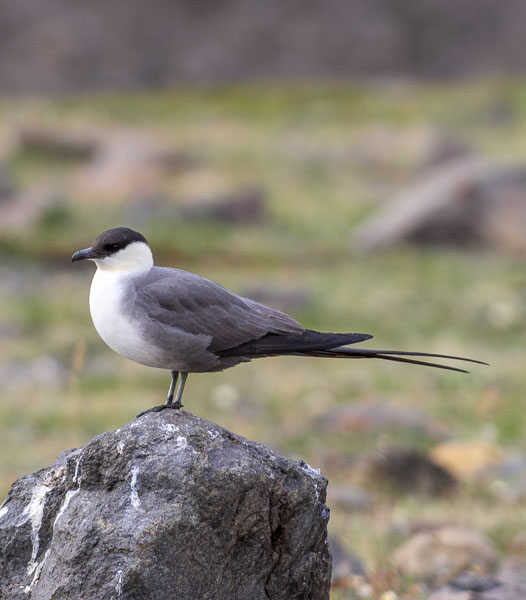 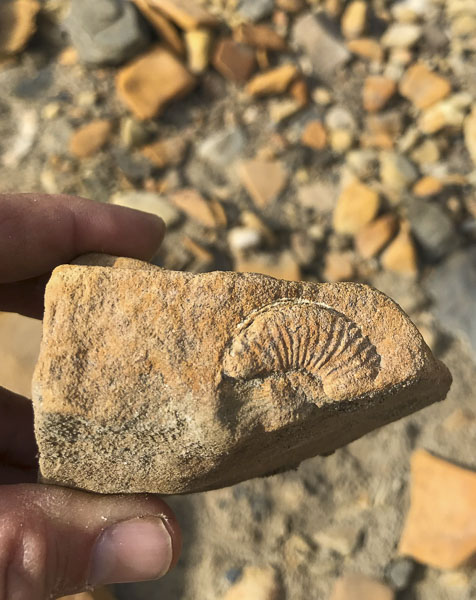 I also found a fossil. There should be many of them, embedded in the sandstone layers. 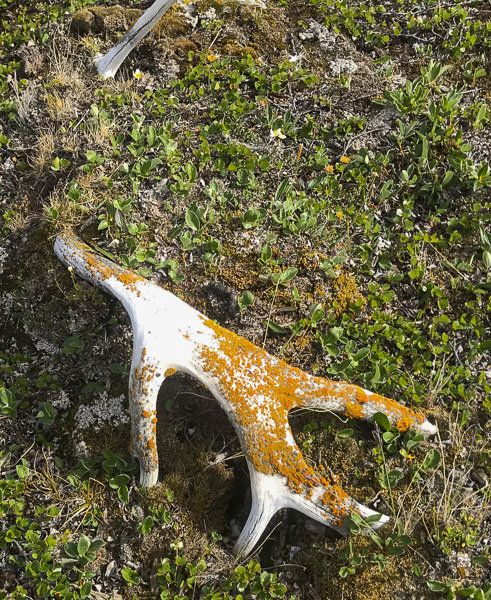 Although the reindeer became extinct in North Greenland in 1899 as a result of several years of cold winters, you can still find antlers from that time. This specimen that I found, must be at least 120 years old! Photo by Bo Normander.