On top of Maniitsoq in Greenland

The view from the top of the Iviangiusat Mountain is worth the whole climb. In clear weather, the archipelago, the mountains and the Greenland ice sheet appear razor sharp in a radius of several hundred kilometers. You can even see all the way to the capital, Nuuk.

It has become autumn and Maniitsoq’s rooftops are covered with crystalline frost. Although it is a cool morning, it’s perfect weather for a hike with sun from a cloudless sky and calm winds.

My goal for today is Iviangiusat Mountain – or Pattefjeldet in Danish – which with its 567 meters is the highest mountain on the whole island of Maniitsoq. On the hiking map, the trip looks affordable, about 10 km each way, but I know it might be harder than expected and as far as I know, the route is not marked.

I head up to the quarry, which is located at the northwest end of town. I don’t see any markings, but I just follow the gorge towards north to reach an open area with many pebbles. From here I’m in doubt about how I get down to the valley to the north – The Flower Valley as it’s called.

First I walk to the left, but only to find some steep descents, then finally I go right, where I find the “right” way down to the valley. In the summer it should be a beautiful scene with diverse Arctic flora, but here in September most of the flowers have withered. The cottongrass, however, stands beautifully with the white tufts fluttering in the wind. 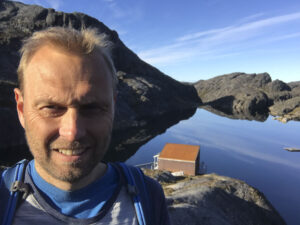 I continue heading west and reach the drinking water lake. Suddenly, I discover the first marking – a white cross – and I begin to follow them north of the lake. Then I lose them again, and the next hour or so I go with no sense of direction other than following the map and knowing that I have to cross the narrow land passage north of the Sarfat Fjord (see the map).

By luck, I discover the white crosses again, and start believing they may lead to the top of Iviangiusat Mountain. I continue following them. 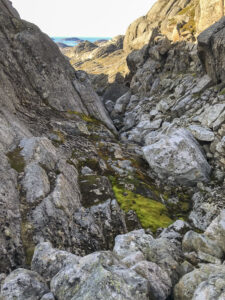 Then comes an apparently easy ascent through a gorge. The shadow side of the gorge is icy in places and I just get to thinking I have to be careful before I slip! Luckily, I only hurt myself a little. The ascent ends and it starts to go downhill, I’m still in a gorge with semi-steep mountain sides on both sides.

At some point, the gorge narrows and several large boulders have to be climbed either above or below them. I try to find the safest passages, which is not that easy, but quite challenging.

Out of the gorge I take a rest by a cairn on a hill top and enjoy the view and get some food. Even though it’s below 5 degrees in the shade, it feels nice and warm in the sun.

After about an hour I reach a valley just below the Iviangiusat Mountain. The valley is really beautiful with large angelicas and a lush, green vegetation on both sides of a small river. 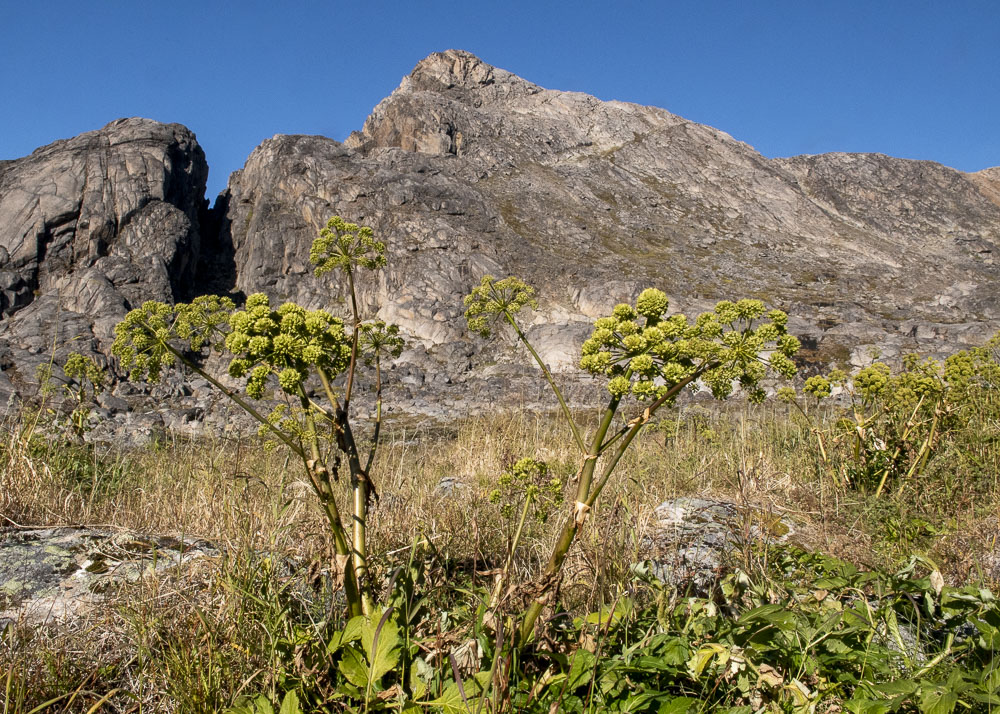 From here it just goes up and up in a northerly direction, following the river and the white crosses, and I pass one small meltwater lake after another. I also get the pleasure of walking on drifts of old snow from last winter.

On the ridge, a loud bird attack has broken out above my head. Two ravens are chasing three white-tailed eagles with loud screams and frontal attacks. The ravens do not succeed and eventually give up while the eagles continue their long hovers.

After a bit of climbing I reach the top of Iviangiusat Mountain. On top of the World – 567 meters above sea level! I’m enjoying the amazing view. To the east and north I see the archipelago, many mountains and the Greenland ice sheet. I can also see some of the houses in Maniitsoq. To the south I believe I’m able to identify mountains at Nuuk (which I have heard one should be able to do), but I didn’t bring binoculars so I’m not sure. To the west unfolds the vast Atlantic Ocean or rather Davis Strait. It’s so clear I’m imagining I can see to Canada, which is impossible though.

The hike back to Maniitsoq goes somewhat faster as I now know the way. I get home just before sunset. It has been a really fantastic though demanding hike and it must be one of Southwest Greenland’s most beautiful day hikes. 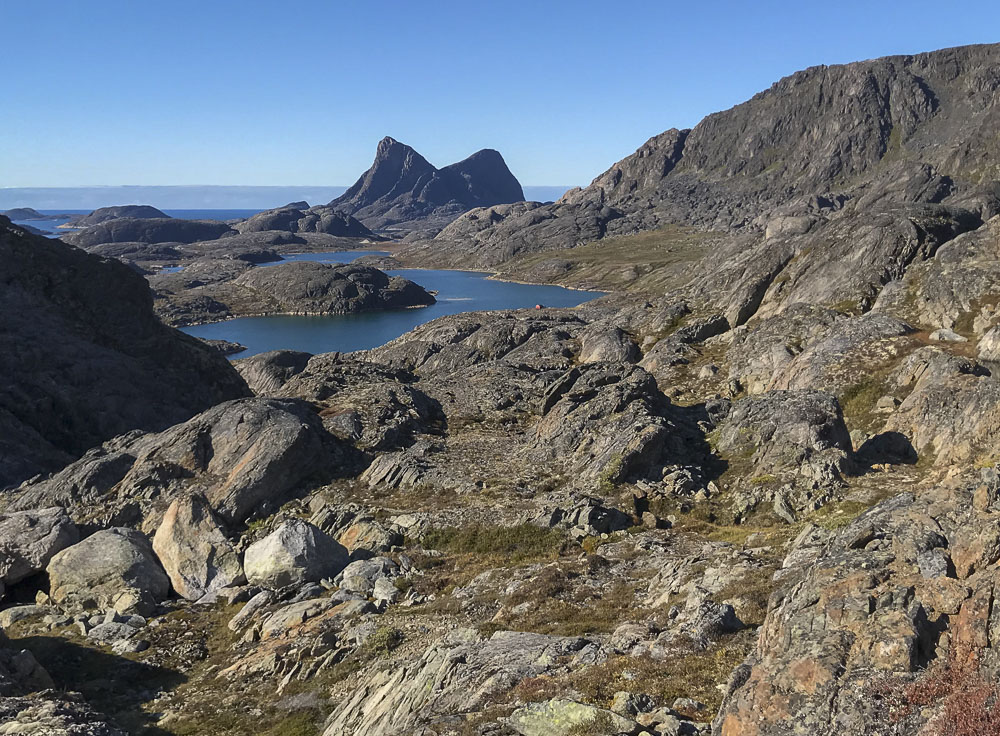 On the way reaching the top of Iviangiusat Mountain with a view to a small red cabin and the twin peaks of Kin of Sal. Photos: Bo Normander 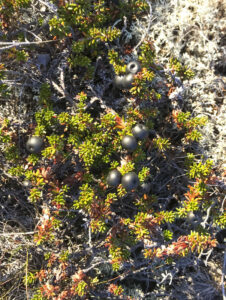 The tasty berries of black crowberry. 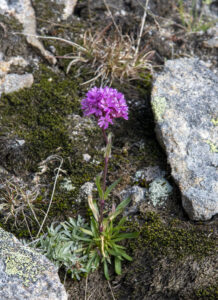 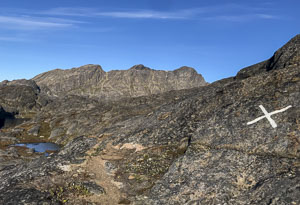 The hike from Maniitsoq to the top of Iviangiusat Mountain (“Pattefjeldet”) is partly marked with white crosses, and there are also trodden paths and cairns that you can follow. At each white cross you can usually see the next cross. But it is important to have a good hiking map with you, and in some places I never found the white crosses.

Along the way, there are a few climbing passages where you have to use your hands for help. Good hiking boots are required, but climbing equipment is not necessary. There is mobile connection on most of the hike. 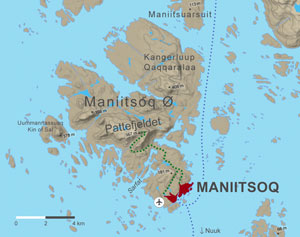 Click for a larger map. (c) Bo Normander and greenmin.gl

How to get to Maniitsoq

Air Greenland flies daily from Copenhagen to Kangerlussuaq, from where regional flights go directly or via Nuuk to Maniitsoq.

From Nuuk, Maniitsoq can also be reached by high-speed boats, which sail three times a week from late April to mid-November. This trip takes 4 hours.

Finally, the coastal ship Sarfaq Ittuk docks in Maniitsoq twice a week on its route up and down the west coast of Greenland. 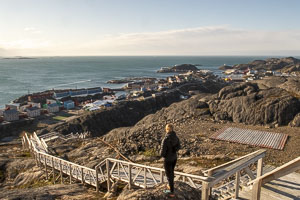 Maniitsoq seen from the ‘Eiffel Tower’

Other adventures in Maniitsoq

View from the Eiffel Tower
Maniitsoq has many stairways, and several of them lead up to mountain peaks with beautiful views of the area. Start by taking a trip to the ‘Eiffel Tower’, which is located on a small mountain in the northern part of the town close to the museum and the old cemetery. A wooden staircase leads 485 steps (count yourself!) up to a view point by a radio tower, which actually looks quite a bit like a miniature of Paris’ famous landmark. The views of the town, the archipelago and the mountains are amazing!

Whale watching
Maniitsoq is one of Greenland’s best places to spot whales. In the summer months (May-September) they swim around in the archipelago and can often be viewed directly from land, e.g. from the whale spot, a wooden bridge in the northeastern part of the town, where there are binoculars that you can use for free. If you want to get closer, arrange a whale safari with one of the local sailors who knows where the whales were last seen. The playful humpback whales are most common, but it’s also possible to see sperm whales, minke whales, fin whales and harbour porpoises.

Adventure on the Eternal Fjord
A boat trip to the Eternal Fjord (Kangerlussuatsiaq/Evighedsfjorden) north of Maniitsoq is an unforgettable
experience in exceptionally beautiful nature. Meet calving glaciers and high mountain peaks or take a dip in the turquoise blue water. See my travel article in the daily newspaper Politiken (in Danish). 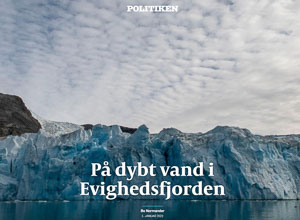